I keep meaning to post about something less biological to balance out the topics here, but when I read about “Denny” I couldn’t resist sharing. There’s been a lot of debate and confusion about whether Neanderthals and anatomically modern humans could or did interbreed, and I think there’s still conflict about how to interpret the amount of genetic material we do share with them. But there’s another, less-known species of ancient human, currently classed as a subspecies of Homo sapiens: meet H. sapiens denisova (although that seems to be a temporary name rather than the agreed-upon standard).

Found in the Denisovan caves, these ancient humans had mitochondrial DNA distinct from both Homo sapiens and Homo neanderthalensis. In other words, most likely a totally new species. The extent of interbreeding was still unclear, but on the 22nd of August, a new paper came out in Nature analysing the nuclear DNA of one of the Denisovan hominins, “Denny”, from a small fragment of bone. It turns out that Denisovans and Neanderthals definitely could and did interbreed, because “Denny” had a Neanderthal mother and a Denisovan father. 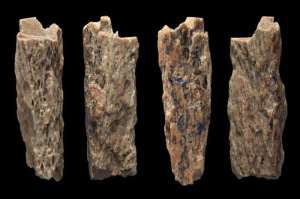 While I haven’t been able to look at the paper yet, I did originally worry about contamination. After all, if Neanderthals and Denisovans were both present in the cave at different times, the process of decay could still have contaminated a Denisovan bone with Neanderthal DNA, and vice versa. However, Svante Pääbo’s lab strictly controls for this kind of thing, and he’s a co-author on the paper: he wouldn’t sign off on it if he weren’t pretty darn sure. And for another thing, Denny’s DNA was very clearly a 50:50 mix, rather than some odd proportions that might make us worry about cross-contamination. For each Neanderthal chromosome, Denny had a Denisovan one.

It’s not really proof of anything one way or another in terms of the ability of either species to interbreed with Homo sapiens, but it does tell us that meetings between different species of hominins didn’t always lead to violence, and that both Neanderthals and Denisovans could clearly tolerate and interbreed with outsiders. Honestly, it’d say something pretty poor about Homo sapiens if we proved to be an exception.

I am a little sceptical of the suggestion that this finding proves that hominin interbreeding was a common event. While the odds are against us finding the remains of the only mixed-ancestry hominin to ever exist, the chance is still there, and we have a vanishingly small data set where one aberration skews the results disproportionately. It tells us it could happen (because it did). We don’t have nearly enough data to really make a judgement on whether it happened often.

Not that I want to pour cold water on the achievements of the Max Planck Institute group and their collaborators. They did a tricky job in extracting, amplifying and then analysing this DNA: ancient DNA is very difficult to isolate and then to piece together in a way that makes sense and can be compared to anything else. The team have done an exemplary job — but people in general shouldn’t get ahead of the actual data.